For Green Teas of Optimum Quality

There are a great many methods and traditions surrounding the preparation of tea, and the ultimate criterion is whether the beverage is satisfying to the one making it. It can be a matter of taste. Still, there are certain core features that are common across methods, and it is helpful to provide a basic recipe to try at first, after which personal preferences can develop. There is one exception: Matcha tea - a traditional Japanese tea - is prepared from a finely grounded tea powder that must be handled differently. For this specialty tea, a more specific recipe is available in the detailed explanations on Matcha.

For a green tea beverage of optimum quality, the best available tea leaves and the purest available water should be used. Tea that comes in tea bags can be inferior in quality compared to loose tea. Since the teapot or cup can act as a heat sink and will cool the infusion below the optimum brewing temperature, it is best to pre-warm the vessel used for brewing, for example by pouring in hot water and swirling this around carefully. Next, this water is emptied and the tea leaves are placed in the vessel, and then covered with freshly heated water at a temperature of 65-75°C (150-170 °F), and allowed to stand for 2½ to 3½ minutes. Water that has just come to a boil is hotter than this, and so optimally should be allowed to stand prior to brewing until it is within the proper temperature range, which can be measured with a kitchen thermometer for best precision. Temperatures greater than 75°C increase the amount of tannins extracted, which is deleterious to the quality of green tea. If the tea is being brewed in a pot, the beverage should be decanted from the remaining leaves after the brewing period mentioned above.

The amount of tea to use for one cup of tea is one level teaspoon (approx. 1.5-2 grams), which should come as no surprise given the name of this utensil. When making tea by the pot, add one level teaspoon of tea leaves for each cup of tea to be brewed. Household tradition is to include an additional "one for the pot". One school of thought is that the best quality tea can only be brewed from fresh tea leaves, and that the leaves should not be reused for a second cup or pot. However, many tea drinkers will make two and up to four or five successive infusions from the same tea, with flavor changes at each step. For some types of tea, the beverage develops a full aroma bouquet only with the second or even third brewing.

The traditional Chinese method for making tea is similar to the foregoing. Loose tea leaves can be placed in a cup or in a teapot. When made in a pot, the tea beverage is decanted from the pot into cups after the appropriate brewing time.

Some people find the remaining tea leaves floating in their beverage to be undesirable, and physical methods of restraining the tea during brewing can be employed, such as the use of a tea infuser. A wide variety of these tea infusers are now available, such as those shown in the photos below, where the first two (top row left and middle) are designed for single-cup use and the others are for use with teapots: 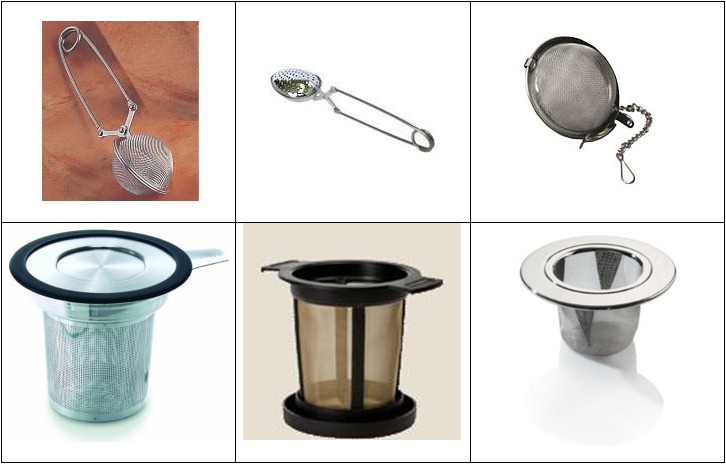 Another physical method to contain the tea leaves is to use tea bags, an innovation that originated in the United States at the beginning of the 20th century. US Patent #723,287 entitled “Tea Leaf Holder” was granted to Roberta C. Lawson and Mary McLaren in 1903. In 1908, a New York tea and coffee merchant called Thomas Sullivan sends out samples of tea in small sown silken bags. Some customers assumed they should put the entire bag in the pot for brewing tea, and this worked quite well.